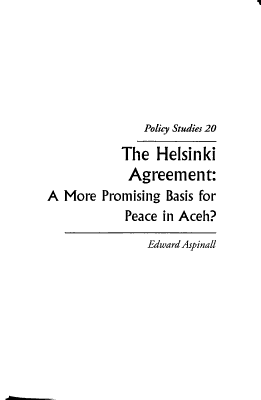 This study examines the latest attempt to bring an end to one of Asia?s longest-running separatist conflicts. In August 2005 in Finland, representatives of the Indonesian government and the Free Aceh Movement signed an agreement which sets down the outline of a comprehensive settlement to the Aceh conflict. Until recently, this conflict had appeared close to intractable. Earlier attempts to reach a negotiated settlement between 2000 and 2003 broke down in acrimony and the Indonesian government launched a military offensive, vowing to wipe out the rebels once and for all. Why did the two parties agree to resume talks so soon after the earlier failures? And what are the chances that the peace agreement will hold this time? Written by a leading expert on the Aceh conflict, this study examines the factors that prompted the belligerents to return to the negotiating table, surveys the course of the negotiations, analyses the deal itself and identifies potential spoilers. It concludes that the Helsinki agreement represents Aceh?s best chance for peace since the separatist insurgency began almost thirty years ago. The deal is more comprehensive than earlier agreements and its monitoring provisions are more robust. There is also more good will on both sides, based partly on greater awareness that previous violent strategies had failed. Even so, there are powerful forces opposed to the deal, and backsliding or equivocation on either side could easily prompt a return to violence if implementation is not managed skillfully. This is the twentieth publication in Policy Studies, a peer-reviewed East-West Center Washington series that presents scholarly analysis of key contemporary domestic and international political, economic, and strategic issues affecting Asia in a policy relevant manner.

Authors: Edward Aspinall
Categories: Aceh (Indonesia)
This study examines the latest attempt to bring an end to one of Asia?s longest-running separatist conflicts. In August 2005 in Finland, representatives of the

Authors: Patrick Barron
Categories: Political Science
More than two and one-half years after the signing of the Helsinki Memorandum of Understanding (MoU) between the Government of Indonesia and the Free Aceh Movem

Authors: Edward Aspinall
Categories: Aceh (Indonesia)
This paper presents a preliminary analysis of the history and dynamics of Aceh's abortive peace process conducted between the Free Aceh Movement (GAM) and the I

Authors: Pieter Feith
Categories: Aceh (Indonesia)
An EU-led mission completed its mandate of monitoring and supporting the peace process in the Indonesian province of Aceh on December 15, 2006. This report look

From the Ground Up

Authors: Patrick Daly
Categories: Political Science
The tsunami that struck a dozen countries around the Indian Ocean on 26 December 2004 evoked international sympathy on a scale beyond any previous natural disas

Authors: Renee Jeffery
Categories: Political Science
For the last thirty years, documented human rights violations have been met with an unprecedented rise in demands for accountability. This trend challenges the