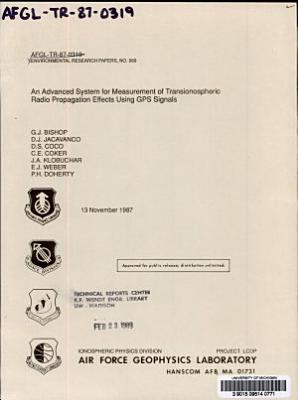 An advanced system for measurement of transionospheric radio propagation effects was developed, utilizing the TI-4100 four-channel Global Positioning System (GPS) receiver. During AFGL's Polar ARCS campaign at Sondrestrom, Greenland in February-March 1987, the system successfully measured ionospheric total electron content (TEC), phase scintillation, and amplitude scintillation on both GPS carrier frequencies, from up to four satellites simultaneously. This was the first time it has been possible to measure these parameters simultaneously, in multiple directions, in the high-latitude regions. Coupled with the simultaneous optical and incoherent scatter radar diagnostics obtained during the Polar ARCS campaign, these measurements significantly improve our capability to characterize high latitude ionospheric structures, particularly their temporal and spatial variation. Additionally, the development of this advanced system has contributed significantly to the technology base for specification of the Transionospheric Sensing System (TISS) for the Air Weather Service. The system can also be software upgraded to perform special navigation in addition to ionospheric measurements in airborne applications.

Conversion to the Metric System of Weights and Measures

Authors: A.F.P Van Putten
Categories: Technology & Engineering
Electronic Measurement Systems: Theory and Practice, Second Edition is designed for those who require a thorough understanding of the wide variety of both digit

The Metric System of Weights and Measures

The National Measurement System for Time and Frequency

Authors: Edward Layer
Categories: Technology & Engineering
The development and use of models of various objects is becoming a more common practice in recent days. This is due to the ease with which models can be develop

Authors: OECD
Categories:
This book highlights the core elements of a possible performance measurement framework to assess health systems at the international and national levels. It als